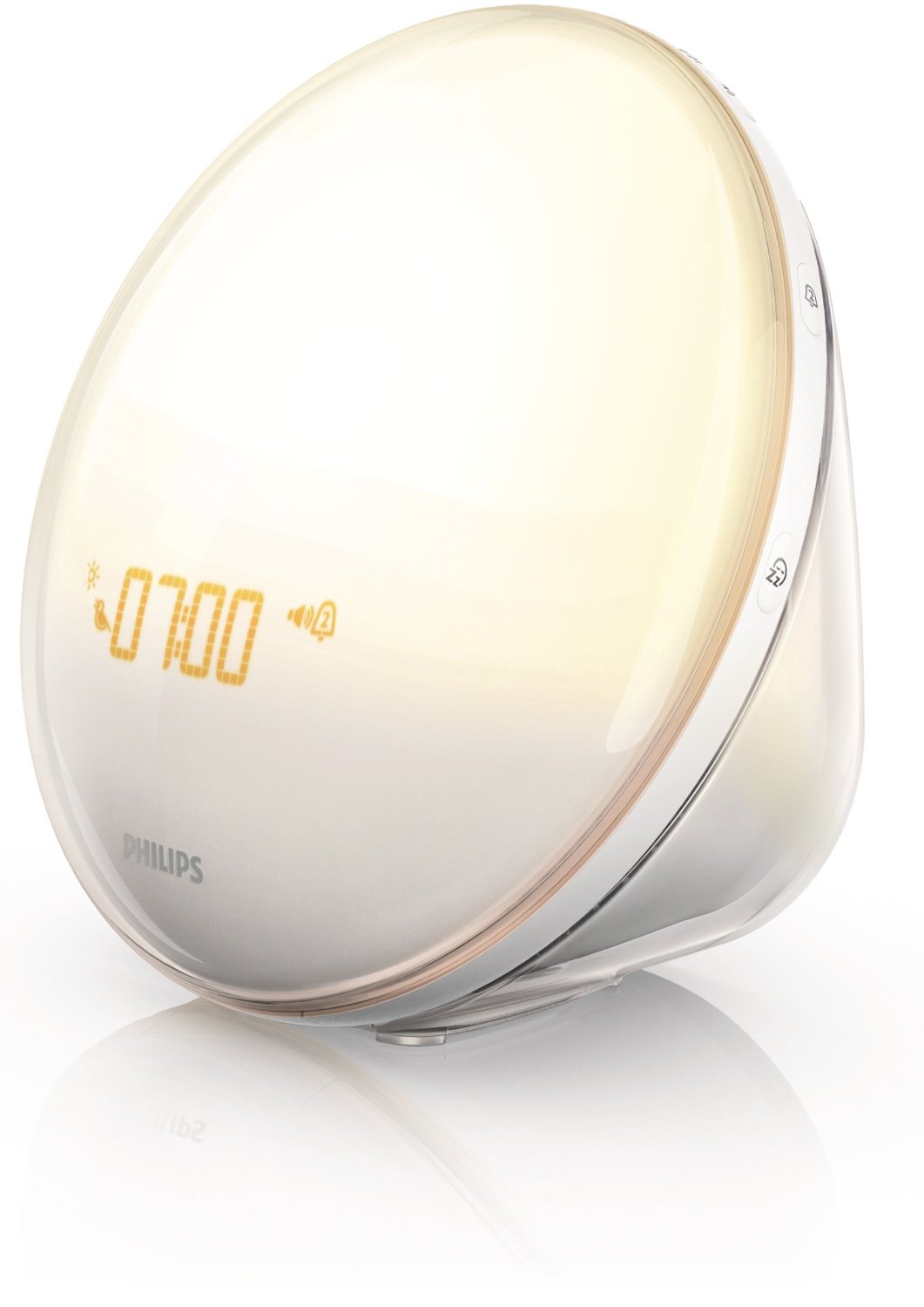 As a brand, Philips needs no introduction, with their technology empire providing us with everything from Televisions and Irons to Shavers and, it seems, Wake-Up Lights. This particular light is a titan amongst light boxes, being the top of the line model in Philips HF35 range. It boasts a staggering array of features at a slightly more staggering price, though the former definitely justifies the latter.

The Wake-Up Light is not marketed as a lightbox, though it can form a good part of light therapy treatment as its clever wake-up system helps to ease you out of sleep, rather than providing a huge jolt.

Phillips’ Wake-Up Light is designed to simulate the sunrise, a process which gets your body prepared for the day ahead even whilst you are asleep. The light comes on about 40 minutes before you are due to wake up, allowing your mind and body to prepare for waking up. It even manages to mimic the colours of a sunrise, for an even closer feeling of authenticity. Similarly, the light will dim around dusk as this has been proven to help people fall to sleep, as normal lights tend to be too bright to allow the brain to relax.

The lamp has a built in FM radio which can be played at any time or used as part of your wake up. There are also a range of natural noises that may also be selected as the alarm.

The snooze feature is easily enabled by simply tapping the lamp anywhere, which will postpone your wake up for nine minutes. All the settings are controlled using a panel of touch sensitive buttons, which allow you to set the time, your alarm and even the current brightness of the light, should you want to use it as a lamp. Thanks to its strong, gripping base, the alarm will not slide about when you press it.

The Phillips Wake-Up Light should prove beneficial to most people, but especially to those who would not refer to themselves as a ‘morning person’. This is not a light box, per se, but you will definitely feel its benefits if you make use of it every morning. An independent research team found that over ninety per cent of users reported better sleeping habits since they started using the light.

This is the best model in the range, boasting a coloured sunrise simulation over the 3510, as well as sound, dusk simulation and touch control over the 3500. As such, it is the most expensive but once you get past that, this is an extremely good light. The design is gorgeous, cheekily reminiscent of the sun and the LED display is nice and crisp, allowing for the time to be easily read.

The FM Radio produces a nice, clear sound but as FM Radio is being phased out, this may not be a feature you get to enjoy for very long. In the event of the eventual collapse of analogue broadcasting, you do also have the option of six alarm tones. Each one of them is meant to put you in mind of nature, babbling brook, birdsong, that sort of thing. Like the light feature, they start off dim and become increasingly louder as you approach your wake up time. They are quite nice, as ring tones go, and manage to avoid the tinny nature that is often associated with electronic alarms.

At the dimmest setting, the lamp will bathe the room in a warm yellow glow, which is perfect for reading and should not stress your eyes too much. This is also the setting which is used to start off your wake-up process and you are sometimes aware of the gradual shift, teasing you back into consciousness.

One potential downside is that the touch controls require you to be very precise; as many of them are grouped together in a small area which means it is easy to press the wrong thing. In order to preserve the aesthetic, few labels have been placed by the buttons, so make sure to keep the manual handy at all times. That said, you would be hard pushed to find a better wake up light, given everything it has to offer.